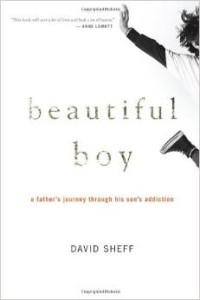 For every parent out there that believes, not my child, this is a must read.

Beautiful Boy is an eye-opener for parents that continues to hope, pray and believe that it will get better. It’s a phase. It’s their friends. It’s this or that — without realizing maybe there really is an issue and you need to confront it – NOW – before it escalates when they turn 18 and go off to college and things quickly fall apart.

Don’t be fooled that just because you live in a good area, offer your teen the best of schools (yet they are underachieving academically), they may even be a top athlete (before they lost interest) — or they have all the luxuries a teen could want (smartphone, trendy clothes, maybe a car and more) — that they aren’t silently suffering emotionally.

Be an educated parent. Learn from those before you.

What had happened to my beautiful boy? To our family? What did I do wrong? Those are the wrenching questions that haunted David Sheff’s journey through his son Nic’s addiction to drugs and tentative steps toward recovery. Before Nic became addicted to crystal meth, he was a charming boy, joyous and funny, a varsity athlete and honor student adored by his two younger siblings.

After meth, he was a trembling wraith who lied, stole, and lived on the streets. David Sheff traces the first warning signs: the denial, the three a.m. phone calls—is it Nic? the police? the hospital? His preoccupation with Nic became an addiction in itself. But as a journalist, he instinctively researched every treatment that might save his son. And he refused to give up on Nic.