Does Your Teen Have the Tools to Handle Cyberbullying?

Does Your Teen Have the Tools to Handle Cyberbullying? 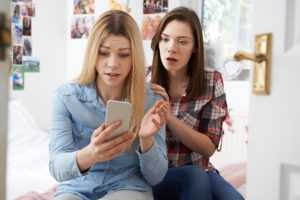 We’re living in an age where incivility and trolling is not only common, it’s become the new normal.

PEW Research Center recent survey found that 63 percent of teens said that online harassment and bullying was a major problem, while 59 percent reported experiencing being bullied or harassed online.

It’s a sea of sadness when we read headlines of peer cruelty and youth dying as the word bullycide has now entered our vocabulary.

Generations earlier, before technology and social playgrounds such as Instagram and Snapchat, kids were teasing and mocking each other in schools, neighborhoods or on their traditional playground with monkey bars and swings.

What hasn’t changed is name-calling.

Being called offensive names is the most offensive form of cyberbullying according to teens in this survey at 42 percent, followed by someone spreading false rumors about them on the internet at 32 percent.

The difference between twenty years ago and today is that with technology, your insults are magnified by a million.

Resilience can be learned

Resilience is a word we’re all familiar with; however, with the rise of online hate and harassment, it’s imperative to discuss how to build digital resilience with our teens.

In the PEW Research survey, teens share that parents are, overall, doing a good job in helping them handle cyberbullying—however, they felt that teachers, social media platforms and others could be more involved.

Digital resilience is a tool that helps people of all ages move through the difficulties of trolling and cyber-combat.

1. Prepare them (and yourself) for the ugly side of the Internet or possibly being upset by what people say. Remind them there could be inappropriate content that slips through filters. Being forewarned is being forearmed.

2. Show them how to block individuals, flag and report abusive content, and when to report incidents. Emphasize the importance of telling someone “in real life.”

3. Show your teen how easily digital pictures can be manipulated. The realization that not everything is what it seems is a useful first step—understanding that life is not as perfect as it may seem virtually. Teens may be familiar with the digital world but less familiar with the motivations for creating ‘fake’ images.

4. Critical thinking. Help them to think through the possible consequences of what they post online. Remind them that there is no rewind: once it’s posted, it’s nearly impossible to take back. Fifteen minutes of humor is not worth a lifetime of humiliation.

5. Encourage your teen to socialize in person with their friends. Communicating solely behind a screen can be isolating. Socializing in person builds more face-to-face contact in helping your child have empathy and compassion towards people.

After a cyberbullying episode hit her daughter’s public charter school, parent and video producer Diana Graber developed this program based on the master’s degree she had just received in media psychology and social change. Graber still teaches the course herself, but also trains teachers to run the program at their own schools, providing video and written materials for a fee.

Since its inception, the program has grown to be offered in more than one hundred schools in 47 states and overseas, ranging from Waldorf to public schools.

Sixth graders begin with the basic concepts of digital citizenship, covering digital footprints, what should never be shared online, and antibullying behavior, such as the difference between being an upstander and a bystander. Seventh graders focus on research skills, covering concepts such as keywords, Wikipedia, fair use, browsers, search engines, and privacy protection.

By eighth grade, the students shift focus again to consuming versus producing online content, covering media literacy issues from sexting to Photoshopping to copyright protection. The final exam is a series of questions we adults would likely fail: What are cookies and how do they work? What does URL stand for? What is a spider? What are the eight tips for a secure password?

While much of the same information is on her complementary website, CyberWise.org, Graber ultimately found that approaching the students directly, instead of using their parents as mediators, works best. “Kids don’t want to talk to their parents in middle school,” she says. “The talking is with each other. If we can make safe spaces in the classroom, that is way more powerful.”

Graber knew her message was received when a new girl posted a photo of herself in a bikini, and an eighth-grade boy who’d taken the course scolded her. “You need to take that off your  Instagram,” he told her bluntly. “That was stupid.” Harsh, Graber concedes—but effective. “In a crude way, he was looking out for her. The kids start being each other’s mentors.”

This teacher seems to be making a difference with her curriculum, CyberCivics, that is now spreading throughout the country.

Is your teen a victim or target of cyberbullying? Have you noticed them becoming withdrawn, nervous when they receive notifications on their phone, loss of appetite, drop in grades? Words can hurt and leave our young people with emotional baggage.

If you have exhausted your local resources, therapy isn’t working, maybe you tried out patient and even a hospital stay — contact us for information on how residential therapy might be able to help.