Does Your Teen Steal or Shoplift? 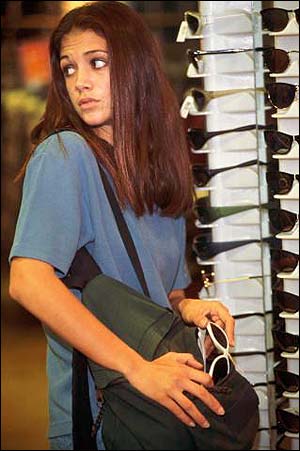 No family is immune to have their good child decide they want to steal or shoplift an item.

We frequently get calls from parents of teens being arrested or accused of stealing and/or shoplifting. Sometimes the stealing is isolated to your home – items in your house to the point that you are hiding your valuables (I’m confident some of you are shaking your head in agreement).   Why are they doing this, especially if they have the money to pay for it?

Too Young To Start

There are almost as many reasons teens steal as there are things for teens to steal. One of the biggest reasons teens steal is peer pressure. Often, teens will steal items as a means of proving’ that they are “cool enough” to hang out with a certain group. This is especially dangerous because if your teen can be convinced to break the law for petty theft, there is a strong possibility he or she can be convinced to try other, more dangerous behaviors, like drinking or drugs. It is because of this that it is imperative you correct this behavior before it escalates to something beyond your control.

Another common reason teens steal is because they want an item their peers have but they cannot afford to purchase. Teens are very peer influenced, and may feel that if they don’t have the ‘it’ sneakers or mp3 player, they’ll be considered less cool than the kids who do. If your teen cannot afford these items, they may be so desperate to fit in that they simply steal the item. They may also steal money from you or a sibling to buy such an item. If you notice your teen has new electronics or accessories that you know you did not buy them, and your teen does not have a job or source of money, you may want to address whereabouts they came up with these items.

Teens may also steal simply for a thrill. Teens who steal for the ‘rush’ or the adrenaline boost are often simply bored and/ or testing the limits of authority. They may not even need or want the item they’re stealing! In cases like these, teens can act alone or as part of a group. Often, friends accompanying teens who shoplift will act as a ‘lookout’ for their friend who is committing the theft. Unfortunately, even if the lookout doesn’t actually steal anything, the can be prosecuted right along with the actual teen committing the crime, so its important that you make sure your teen is not aiding his or her friends who are shoplifting.

Yet another reason teens steal is for attention. If your teen feels neglected at home, or is jealous of the attention a sibling is getting, he or she may steal in the hopes that he or she is caught and the focus of your attention is diverted to them. If you suspect your teen is stealing or acting out to gain your attention, it is important that you address the problem before it garners more than just your attention, and becomes part of their criminal record. Though unconventional, this is your teen’s way of asking for your help- don’t let them down!

If they have escalated to a point that they are stealing from your home – usually this can mean they are in need of money. In most cases it is typically for drugs. Be sure you are reaching out to your teen and trying to engage in conversations. Communication is key to helping build your relationship and trust – yet sometimes it can be a struggle.

If it fails, get outside help with a counselor or therapist or someone he/she trusts to speak with. If the problem continues – you may need to research residential therapy.  Please contact us for more information.