Eating Disorders Are Also a Disorder for Male Teens 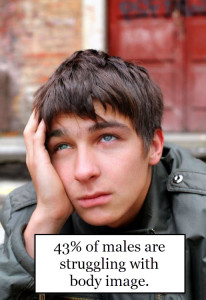 The words ‘eating disorders’ often conjure up images of young female teens, yet research suggests that numerous boys and teens are also at risk. According to the National Association of Anorexia Nervosa and Associated Eating Disorders, one in every 10 cases of eating disorders involves males.

Maudsley Parents, meanwhile, notes that while in the 1960s and 1970s, eating disorders in males were thought to be practically non-existent, in the 1980s and 1990s the number of males affected was thought to stand at around 10 per cent and now, males make up 25 per cent of eating disorder patients.

Boys as young as seven or eight can develop anorexia, bulimia, binge eating disorders or Eating Disorders Not Otherwise Specified (EDNOS) and it is estimated that some 10 million boys and youths in America will have an eating disorder at some point in their lifetime.

The most common age for the development of anorexia nervosa is the late teens or early 20s, while binge eating disorder tends to arise in males and females in their 20s. The most common age for the onset of bulimia, meanwhile, is 12 to 25. Sometimes, although an official disorder is not diagnosed, problems still exist. According to National Eating Disorders.org, for instance, around three per cent of teen boys display unhealthy weight control behaviors, while 43 per cent of men are dissatisfied with their body image.

Some of the most pertinent findings on male eating disorders include:

If you or a loved one may have an eating disorder, it is vital to obtain help; anorexia nervosa has an alarmingly high mortality rate, and the sooner diagnosis and treatment are received, the better. Gold standard treatments for eating disorders include Cognitive-Behavioral Therapy (in which patients are taught about the interrelationship between how they think, behave, and act, and taught practical strategies to overcome obsessive thoughts and negativity).

Another excellent treatment is Maudsley Therapy, which involves the whole family supporting the person with the eating disorder. Families are taught to set aside blame and judgement and focus on a positive strategy that each members plays an important role in carrying out.

In eating disorders such as anorexia nervosa, the first step is to establish weight gain. In bulimia, the key is to stop the bingeing-purging cycle, while in binge eating disorder, bingeing is the key behavior which must be prevented.

Once the individual establishes a normal weight and begins to feel stronger, they are then given more freedom with respect to choosing the types of food they eat, etc. Eventually, they develop a healthy, positive relationship with food, and recognize the triggers that can lead to a relapse into unhealthy behaviors. Patients also need to be tested for other possible co-existing conditions (such as depression, or anxiety). If present, these conditions need to be diagnosed and treated, to enable lasting recovery.

If you believe your son is struggling with an eating disorder and you’ve exhausted your local resources, contact us to learn more about how residential treatment might be able to help your family.