According to scholars and psychologist, the smartphone devices are causing a heist of the apparent preoccupation, not only in adults but also in the kids. 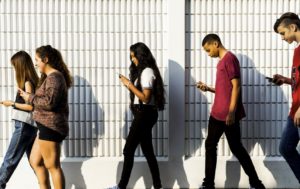 Especially when the matter of the availability of the internet over the smartphones is concerned, the hike certainly makes it clear that the extensive users of this technology are addicted to it.

A comparison between the addicting drugs and the smartphone was drawn by a psychologist analyzing that alcohol makes a person addict of it as the consumption of the first sip makes it more enchanting in the next. Similarly, the smartphone usage has been analyzed with the study of over 1,500 users, majorly including teens, that the initial usage raises the urge for the next usage.

Common Sense Media (CSM) surveyed more than 1,200 people including parents and teens which resulted that 50% of the teens accept that they are addicted to the smartphones; while around 60% parents say that their children are addicted to their devices.

The smartphones sale comparison could definitely tell that 50% of the sale of smartphones has grown up in the present year since 2013.

Availability of internet, social media networks, attractive games, handy apps and vast data storage capability has raised the bar of the smartphone usage and so it the mercury of the smartphone obsession rising.

Presently in the world, some states argue that extensive smartphone usage is a disorder and is an addiction but some of the developed states including United States have no view over the smartphone addiction.

They take it as just an extensive use, not an addiction as they don’t have any solid base to determine it as a disorder.

Going through some general examples, the roads and streets are the best examples in telling that how much the teens are addicted of the smartphones. A number of accidents happen every day in routine, caused by the teens, as they were busy in using their smartphone and smashed their car into the others or a pole or a pedestrian.

Almost 80% teens are surveyed who at least check their phone every hour, amid 70 – 72% of teens is found responding to the SMS and the instant feeds instantly. Parents stay worried for their children and the smartphone distraction has increased the ratio of worry in parents. Parents find their children:

These situations are particularly an alarm for the parents that ring the bell of danger that their child is getting to a highly distracted venture by paying much heed to their corky device instead of the actual requirements of living.

Some essential preliminary steps are required on the part of the parents to ensure safety and prosperity of their children. It’s initially quite hard for the parents to properly analyze in what ways and how much time is their child giving to his or her smartphone.

Precisely the direct questionnaire would certainly sound like a direct assault to the children which could bring up any of the unexpected results upon parents. Or if the parents inspect the smartphones of their children or restrict them directly to use it, could create a wave of defiance in the homes.

The most preferable and highly recommended solution, and one of handpicks of the experts, are the spy apps. They help the parents to be with their children when they are using their smartphones, virtually.

(Please note, apps should never replace offline parenting. Your communication with your child is crucial in helping them make better online decisions when you’re not there. Experts have also agreed that your child should know if you have installed these apps. Breaking down a trust factor with your child is never a good idea unless there is a good reason or you fear your child is in danger).

If you are struggling with your teenager’s internet addiction and you have exhausted your local resources, learn more about how residential treatment can help your troubled teen develop a healthy relationship with technology. Contact us today for a free consultation.