Skittling: It May Not Be What You Think 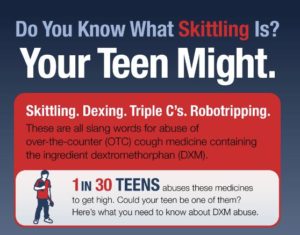 Skittling. If you’re like most parents, you probably don’t have the faintest idea of what this word could possibly signify. Maybe a poor attempt at verbalizing the act of eating Skittles?

Don’t let your sweet tooth kick in quite yet! Among many other terms, “skittling” has come to signify the abuse of over-the-counter (OTC) cough medicines containing the active ingredient dextromethorphan (DXM).

While these medicines are safe and effective when taken as directed, they can produce harmful side effects when taken excessively. Some teens intentionally take large amounts of DXM – sometimes more than 25 times the recommended dose. In fact, one out of three teens reports knowing someone who has abused medicine containing DXM to get high, while one out of 30 teens has abused it themselves. Unfortunately, this issue is more prevalent than most people realize. Next time you’re around your teen, be sure to keep an ear out for the following common slang terms that are used to describe DXM misuse and abuse:

You can find a full list of the many slang words used for DXM abuse here.

If you hear your teen using this slang, it’s important to have an open and honest conversation about the risks of abusing DXM, including the potential side effects. You can also visit WhatIsDXM.com with your teen to watch and discuss stories from real teens who have abused DXM. You have the power to ensure your teen is educated, so that he or she can confidently make smart and safe decisions.

Learn more about how to prevent teen OTC cough medicine abuse at StopMedicineAbuse.org.

Contributor: Blaise is a mother of one, caregiver of two, accountant and community advocate. Blaise is also a contributor to The Five Moms blog on StopMedicineAbuse.org, working to spread the word about cough medicine abuse with other parents. Join the conversation by following Stop Medicine Abuse on Facebook and Twitter.