Missing Medicine? It Could Be a Sign of Medicine Abuse

Does the scenario highlighted in the video below seem familiar?

I hope not, but the reality is that missing medicine could be a sign of over-the-counter (OTC) medicine abuse. It’s common to hear about teens abusing illegal drugs, alcohol and even prescription medication to get high, but many parents don’t realize that teens may also abuse OTC cough medicine.

If this is news to you, you may be wondering, why would teens abuse OTC cough medicine?

Teens often abuse OTC cough medicine because it’s affordable and easy to access. They may also mistakenly believe that it’s safer to abuse than illegal drugs.

The good news is that there are things you can do to help prevent your teen from abusing OTC cough medicine.

The first step is education. Learn about dextromethorphan (DXM), the active ingredient in most OTC cough medicines. Learn how to identify which products contain DXM by looking for the Stop Medicine Abuse icon. Become familiar with what DXM abuse looks like.

In addition to being on the lookout for missing medicine, it is also important to monitor your teen’s behavior for warning signs and side effects including:

Communicate with your teen.

Have a conversation with your teen about the risks of medicine abuse. Ask your teen if he or she has ever been exposed to DXM abuse or whether it’s something that’s discussed amongst peers. The reality is that one out of three teenagers knows someone who has abused OTC cough medicine to get high. That’s scary to think about, but teens who learn about the risks of substance abuse from their parents are 50 percent less likely to use drugs.

It’s also important to communicate with other parents, teachers and community members to spread awareness. These conversations can be had at sports games, school activities or parent events to help inspire other parents to become vigilant against cough medicine abuse.

Parents can’t protect their teenagers from all the dangers of the world, but with education, close monitoring and a supportive community… parents can prevent OTC medicine abuse.

You can get more information at StopMedicineAbuse.org or join the conversation by following Stop Medicine Abuse on Facebook and Twitter.

Contributor: Anita Brikman joined the Consumer Healthcare Products Association (CHPA) in 2016 and leads the association’s communications and public affairs functions. As a member of the senior management team, she is responsible for establishing and directing the organization’s communications strategies and goals. Anita is passionate about healthcare issues, with over two decades of experience as a news anchor and health reporter in major television markets – making medicine abuse awareness and prevention efforts important to her. She is also the mother of three teenagers. 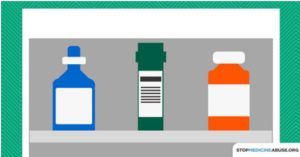 Awareness of a problem is the first step to solving it. Parents were recently spreading the word about teen over-the-counter (OTC) cough medicine abuse for National Medicine Abuse Awareness Month. Although October has come and gone, we can still continue to spread awareness and help other parents of teenagers just like us become aware of this serious issue.

While the abuse of OTC medicines doesn’t often receive the same media attention as the abuse of alcohol, marijuana or prescription medications, it’s still a common practice among today’s teens. In fact, one in 25 teenagers reports getting “high” by consuming up to 25 times the suggested amount of cough medicine. 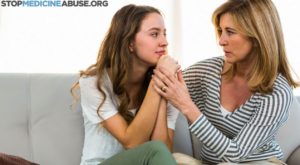 Why the abuse of cough medicine?

Many teens believe that abusing cough medicine is less harmful than using other drugs because it’s legal and easy to attain. Unfortunately, they’re misinformed. Most cough medicine contains the active ingredient dextromethorphan (DXM), which has dangerous effects when taken in excess, such as hallucinations, vomiting, sweating and memory loss. The risks only get worse when DXM is combined with other substances, such as drugs or alcohol.

Here’s another problem. Due to the fact that cough medicine can be obtained easily and inexpensively, it’s an attractive choice for teen users. It’s also much easier to hide from parents. What parent would suspect risky behavior when they see an empty bottle of cough medicine in the trash? Unfortunately, only 50% of parents are aware of DXM abuse at all.

The Stop Medicine Abuse icon is included on OTC products, which contain DXM. Even without any knowledge of DXM, this icon alerts parents to stay vigilant about the potential for abuse.

With the hashtag #CheckYourShelf, the video encourages parents to monitor the amount of cough medicine in their home, safeguard their medicine cabinets and safely dispose of old/unused medicines. It also urges parents to check themselves by asking the following questions:

Informing parents about DMX abuse is the first step in preventing it. As the temperature drops and colds become more frequent, let’s continue to spread awareness about this critical issue, so parents know how the cough medicine in their home is being used.

You can get more information at www.StopMedicineAbuse.com or join the conversation by following Stop Medicine Abuse on Facebook and Twitter.

Contributor: Anita Brikman joined the Consumer Healthcare Products Association (CHPA) in 2016 and leads the association’s communications and public affairs functions. As a member of the senior management team, she is responsible for establishing and directing the organizations communications strategies and goals. Anita is passionate about healthcare issues, with over two decades of experience as a news anchor and health reporter in major television markets – making medicine abuse awareness and prevention efforts important to her. She is also the parent of three teenagers. Join the conversation by following Stop Medicine Abuse on Facebook and Twitter.