Teen Alcoholism: What is the Mentality Behind It? 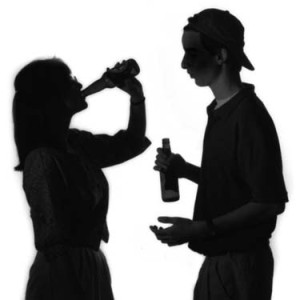 Teen drinking, which is underage drinking, is an issue that many parents face.

Being an educated and prepared parent helps to keep your child safer.

Teens often indulge in a “pre-game” drinking binge before parties or sports events. Large quantities are consumed quickly in order to sustain a sense of inebriation over many hours. The point of a pre-game binge is to achieve inebriation before an event where access to alcohol and drugs will be restricted.

Pre-gaming is especially dangerous in that it often occurs in a vehicle. Although drinking can occur during the drive to the event, teens may also drink in the parking lot of the event venue. Alcohol can also be smuggled into venues, disguised in water bottles or hidden inside large purses or jackets.

The Parent Game Plan: Before parties and big events, be involved as your teen prepares. When possible, drive your teen and his friends to the venue. As always, be honest with your teen about the dangers of drinking and your stance on the issue.

Working for the Weekend
Some kids work hard all week on academics and sports, but see the weekend as a time to partake in illicit activities and party behavior. This mindset is especially prevalent at competitive high schools. This attitude toward drugs and alcohol equates recreation as something that is rebellious against responsibility and is seen as a reward for good behavior. After working hard, they feel as though they deserve to play hard. This type of attitude can lead to a dependence on drugs or alcohol as a means to relax.

The Parent Game Plan: Explain to your teen that responsible behavior throughout the week does not warrant complete independence. It is also important to teach your teen positive ways to relax. Positive recreational activities and hobbies not only occupy a teen’s time, but they also offer a sense of accomplishment and self-worth that alcohol and drugs can never provide.

Social Lubricant
Let’s face it. Being a teenager is difficult, and social interaction can be awkward. Many teens drink to feel less inhibited and more secure in social settings. Unfortunately, some teens will drink in response to anxiety about a crush, which heightens the risk of poor sexual decisions. Forming these habits during formative years can have a drastic effect on a teen, potentially making it difficult for her to socialize without alcohol or other substances.

The Parent Game Plan: Teens needs to learn how to face the fears and risks of social interaction in a substance-free environment. Host co-ed movie nights or game nights for your teen’s friends and serve as a chaperone. Sometimes teenagers turn to illicit activities because the peer group doesn’t accept wholesome activities as fun. It is your job to provide your teenager with a healthy example of “adult” fun.

Another option is to introduce your teen to an older mentor. Encouraging your teen to spend time with mentors with similar interests can help him adapt to a more mature standard of behavior. This will also give your teen the opportunity to talk about embarrassing or difficult situations he may not be able to come to you about.

For the Win
During unsupervised parties, many kids participate in drinking games popularized by college students. While these games can seem as harmless as table tennis to teenagers, the truth is those who participate in drinking games are at a higher risk for developing alcoholism. Once teens accept the rules of these games, the height of tolerance levels is tantamount to strength. These teens think they are winning at a game, but they are actually exposing their brains to toxic levels of alcohol.

Essentially drinking games are a way for teenagers to bond while participating in binge drinking behavior. Unlike pre-gaming, there is no time limit in drinking games. This means that many teens will drink until their physical limits are reached. Alcohol poisoning and black-outs are two immediate effects of binge drinking.

The Parent Game Plan: Teenagers who binge drink will be unable to hide the effects from their parents, which means they will most likely “crash” where the party was thrown or they will stay with a friend who has lenient or oblivious parents. Parents can discourage binge drinking by confirming plans with other parents and enforcing curfews. Let your teenager know that you expect him not only to behave responsibly, but to look out for his friends who may be affected by this social behavior.

How to Stop Teen Alcohol Abuse

Parents who are involved in their teenagers lives – offering support, encouraging questions and providing wholesome outlets for socializing – are following the #1 rule to keeping their children safe from alcohol abuse.

If you suspect your teen is drinking, be sure to seek outside help. Have you exhausted your local resources and you find their behavior is escalating? Don’t be a parent in denial and believe this is only a phase they will grow out of. Sometimes it is, and sometimes it’s not. Learn more about your options if you feel you are at your wit’s end – contact us for more information.