Motor Vehicle Safety: Teens and The Dangers of Distracted Driving 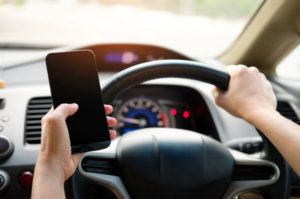 Becoming a new driver is one of the most exciting and liberating experiences in life. With a driver’s license comes the freedom of being independently mobile; however, there’s more to driving than the ability to slide behind the wheel of a car and take yourself where you want to go. Driving also brings a lot of responsibility that if ignored can result in injury or even death.

As a driver, you’re responsible for being alert and free of distractions, but there are many things that can divert your attention and create a dangerous situation for you and for others on the road. Distracted driving is a very serious threat: According to the CDC, it results in more than 1,000 crash-related injuries and an average of nine deaths a day. It is especially a concern for teens, as drivers who are most likely to be involved in fatal motor vehicle accidents are those who are younger than 20 years old.

As a teen driver, you lack experience driving and reacting in certain situations. Teen drivers are typically considered to be less focused, less likely to use their seat belts, and more reckless and likely to speed. Because of these factors, the risk of being involved in an injury or fatal accident is higher when you’re distracted. Although people of all ages can be distracted, certain distractions are widely associated with younger drivers. 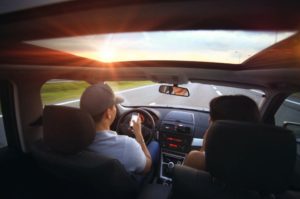 Texting is a distraction that covers all three categories: It requires your brain, eyes, and hands. Studies have shown that teens are more likely to not only drive while texting but to hold longer conversations while doing so.

Driving with other people in the car can be a major distraction, particularly when your passengers are friends of the same age. Passengers can draw you into conversations and even arguments. Rowdy behavior and pressure from peers can also come with having multiple passengers in your car. Friends can potentially pressure you into driving faster or encourage you to take dangerous risks. The risk of getting in an accident increases with each additional passenger in the vehicle.

Texting isn’t the only capability of your phone that can be distracting. Almost everyone has a range of apps that they frequently use, and any of these can take your attention off of the task of driving. Whether you’re using social media apps, listening to podcasts, or playing games, you’re putting yourself at greater risk of an accident.

Putting on makeup, eating, and drinking should be done before you get in the car. Adjust the mirrors, pick out what you’re going to listen to, and set up your GPS before you put the car in drive. Another good rule to follow is to pull over if a distraction pops up that will take your eyes, hands, or attention away from driving. Put your cell phone on vibrate and put it in a location that is out of sight: This will force you to pull over if you’re tempted to check your messages or make a call. And avoid driving with passengers, or at least limit the number of friends that are allowed to ride with you.

This article written by Jonathan Rosenfeld is lifted from Rosenfeld Injury Lawyers.